This weekend I witnessed – mostly through Twitter – my town being taken over by two gatherings for justice, both of which themselves included diverse voices. One was an Evangelical Christian seminar called The Justice Conference, held downtown and featuring an array of Christian voices on issues of justice as identified from a largely White Evangelical perspective. The other was a series of protesting actions to get a trauma center in the South Side, which would be used to save people shot within range as there are no trauma centers for adult victims of shootings on the South Side of Chicago.

I would not argue that one was more important or justice-y than the other. Both were calls to justice but for different audiences. Evangelicals need to be called to economic, sexual, gender, and racial justice. There were problems as Ryan Kenji points out. It largely centered on white and male voices, framed conversations in the problematizing nature of White Privilege, disappeared LGBTQ issues and speakers, and included only one Woman of Color for the mainstage, etc. But at the same time, for many it was revelatory and even earth-shaking to hear voices speak loudly and prophetically against capitalism, patriarchy, prison-as-justice, and White Supremacy.

But the problem was that while the protestors at the University of Chicago were directly confronting White Supremacy, detainment control of poor black communities , and capitalism in order to get a much-needed trauma center open for victims of gun violence in the South Side and save lives, attendees and organizers of The Justice Conference were largely operating in a mode that takes White Supremacy and Heteropatriarchy as norms. We could see this in some of the problematizing of the very definitions of Justice, or in how the conference was arranged in the first place. Calling men “pastors” while calling women “sisters” is a capitulation to a male supremacy ever present in the majority of Evangelical churches – whether or not they call themselves Complementarian* or even know what that term means. 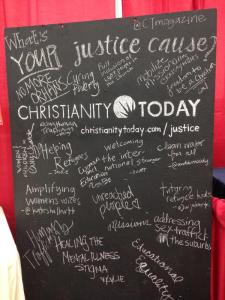 Christianity Today hosted this chalkboard asking “What Your Justice Looks Like”

At heart was a re-defining of justice to fit into a highly individualistic framing. Oddly enough for a culture at-odds with post-modernism and a society they consider too relativistic, Evangelicalism redefines justice not to movements of people righting societal injustices, but to people individually helping to curb things they consider wrong or unjust. Because there is little room for community-based action and little understanding of corporate responsibility (everything is broken down to individual sin and individual responsibility), it’s a mess for the foreseeable future**.

All of this to say that, in some respects, justice is often a word applied to the top of specific interests of Evangelicals (I believe Daniel spoke about this) and in line with Evangelical priorities (worship, missions, sex trafficking) that either are directly a part of Evangelicalism or can be neatly aligned with it (White Privilege, as opposed to addressing White Supremacy). I’m thinking about this as I’m writing my book on Evangelicalism’s roots and how it nose-dives with neoliberalism, but also as my church is partaking in a several-week-long sermon series on reclaiming Evangelism. And, for a variety of reasons, this discussion gets me in an uncomfortable position.

I don’t necessarily like to be uncomfortable, but I do like to interrogate what could make me squeamish, and why something may be making me uncomfortable and what to do about that.

And yettttt, Christian witness of our faith has largely sided against life. It has been and still is a message steeped with death, and given in ways that reflect that. Rich recalled going to a Hell House when he was a youth. For those not familiar with Hell Houses, it’s a Halloween-themed church gathering that uses imagery left over from Dante’s epic poems and Carman’s music videos to scare people away from hell and into the abusive Jesus who would send them there for not believing that he could and would send them there.

Most churches despise this form of evangelism, however. In light of more friendly and effective Evangelists like Bill Bright, Billy Graham and megachurches following in the footsteps of Willow Creek Church, seeker-friendly churches do not pound on doors, do not preach condemnation, rarely-if-ever talk about hell, and go out of their way to show visitors and would-be Christians that they are welcome at the church.

I remember when seeker-friendly was seen as a denigration by my more fundamentalist peers. They were seen as “not preaching the truth”, being afraid of “man’s approval rather than God’s”. I felt then that they may have a point.

I think I agree with them now. Not that the truth is that every person is on their way to hell without affirming some four or five points about doctrine and then saying a prayer. But that their seeker-friendly message was just a veneer, a sleek cover for the same old thing and therefore dishonest.

Gospel was, in early Christian times, a message from the courts of power that meant (in an Orwellian sense) “good news”. That good news was usually the ascension or birthday of a new emperor. Or the conquering of a city.

This was certainly not good news to the colonized. That good news was of suppression and oppression.

Which is why the good news of Jesus was upsetting to that order (and why he was killed by that same state power). Because Jesus’ good news was good for the poor, for women, for the indentured, for the slaves and the nobodies and the prisoners. This was the message when reading from a synoptic gospels-centered view at least (there’s great stuff in Acts, the epistles, Revelations, and John’s Gospel, but I’m convinced that trying to read those outside of the framing of the gospels first is a huge mistake and leads to a recontextualization of the texts that over-spiritualizes them, robs them of their liberating power and upholds current, violent, dominant power structures).

The gospel message of the seeker church is delivered in a nice package, but inside the package is the dominant, oppressive system’s Gospel. It is Caesar’s gospel of war, empire-building, fear, hell, torture, suppression, oppression. Anti-LGBTQ. White Supremacist Euro-American theology with abundance of shame and guilt. Capitalism-entrenched. Patriarchal. Abuse-as-central to salvation. Eternal suffering and torture to justify unnecessary suffering…

When so many White Christians are justifying child abuse that happens in their own communities (whether it happens when a Duggar male child sexually abuses Duggar female children or when cops target, harass, beat up, throw down black kids attending a pool party in a white neighborhood) but blaming LGBTQ people for imagined abuse – or at the least being silent about such abuse coming from their own communities – the “nice” Christianity doesn’t appear so friendly to those on the margins.

As long as the Christianity that we offer to the world is fundamentally capitalist and abusive, then perhaps it’s not a message that needs to get out so much? If the good news that we have to offer to the people is like the good news of empire and dominion and violence, then how does it differ from Caesar’s good news?

Also, if our good news is tied together with a culture that seeks to superimpose over other cultures – if it aligns godliness with whiteness or consumeristic spirituality, for instance – then is it actually good news?

So, a new evangelism needs to be tied in with a liberating gospel.

* Complementarians believe that women and men are essentially different and that each has an assigned gender role to facilitate the other in a heteronormative marriage relationship. Shortly, the man is the head of the household and the woman is his helper.

**Though we can hope for better in the future, yet this may encapsulate structural theological problems within Evangelicalism that will need to be addressed before it may be able to be an effective engine for justice.