US liberals are now aghast that a foreign country could interfere in some capacity with their right to run their own elections. While that may have been the case in some limited capability, local electoral riggings and voter disenfranchisement—as well as the wholly undemocratic process of the electoral college, which, for the second time in 16 years stole an election from the popular vote—were without a doubt the overwhelming factors. Yet MSNBC is not running nonstop coverage on the inequities in the US electoral system. And while the gears of war are churning among both the Right and the Center, the idea of payback being a mother never sits well. The US often and continually interferes in the elections of nearly every other country and directly or indirectly tries to overthrow the democratically elected (sometimes not, admittedly) leaders of other nations (most recently Venezuela  and Nicaragua), which disrupts their development and kills countless civilians. Liberals will sometimes acknowledge that while this may be true, two wrongs don’t make a right—yet no one is trying to dismantle the CIA or the ironically-named National Endowment for Democracy, the backdoor “humanitarian agency” USAID, the John Bolton-led and fiercely undemocratic NSA, NATO, or the IMF; instead, liberals are more likely to trust them now than before. But there’s more to this narrative, a deeply embedded American Exceptionalism that insists that America is united and ultimately good, and that any claims to the contrary are Whatabouttisms meant to divide us.

There are some notable similarities between the controversy surrounding Russiagate and the Civil Rights Movement: the accusation that agitation is not natural; that division and struggle is alien and therefore wrong; that America is an exceptional land where people are happy and know their place. This becomes exceptionally clear when we talk about many of the posts supposedly created by Kremlin-backed Russian bots or hackers that highlight racial strife. These tend to be in themselves based on anti-blackness, such as the palpable fear in this CNN shit-piece on black men taking self-defense classes. Or an Atlanta-based NPR reporter warning about a Black activist having done guest spots on Russia’s state-funded Sputnik Radio (which airs in DC[1]). The fact that NPR is also state-funded is apparently immaterial. On NPR’s Morning Talk, a reporter dismisses Black leftists and activists such as Anoa Changa and Eugene Puryear as agents of Russian influence:

Like RT, U.S. national security agencies say Sputnik [Radio] is part of Russia’s propaganda machine. The network gives Changa another platform to get her message out. She denounces what she calls racial injustice and oppression. These concerns fall in line with what experts call a key message of Russian propaganda – amplifying existing political and social divisions. [Emphasis mine]

In the space of half a minute, this nationally-aired and revered National Public Radio show twice calls Black American activist Anoa Changa an agent of Russian propaganda.

Changa sees this tactic as erasure and harmfully racist:

As you can imagine, there isn’t much appetite for this kind of work in mainstream media. So I have my own podcast, and when I’m invited to speak to larger platforms, I do so, gratefully.

Recently, I took such an invitation and appeared as a guest on “By Any Means Necessary,” a radio show hosted by Eugene Puryear and Sean A. Blackmon on Radio Sputnik. Sputnik is a news agency established by the Russian government-controlled news agency Rossiya Segodnya. And yet Eugene, Sean, and their producer maintain editorial freedom in developing and producing their content.

I certainly maintain my independence when I go on their show, talking about the issues that matter to me. I do not consult with the Russian government before I speak my mind, nor do I care what they think about what I say. There aren’t a lot of mainstream platforms that give voice to left-wing Black activists, and Puryear and Blackmon do. On the most recent interview we discussed the glaring issues with Trump’s Economic Executive Order…

In four minutes, Kauffman [the NPR reporter] destroyed my credibility and my reputation, for the crime of not having access to the kinds of American state funded media that he, a white man, is freely given access to.

Fortunately, according to her own report, local activists and (somewhat surprisingly) more mainstream non-profits did not distance themselves from her, which is a testament of her own work as others have been harassed and blackballed for similar accusations. 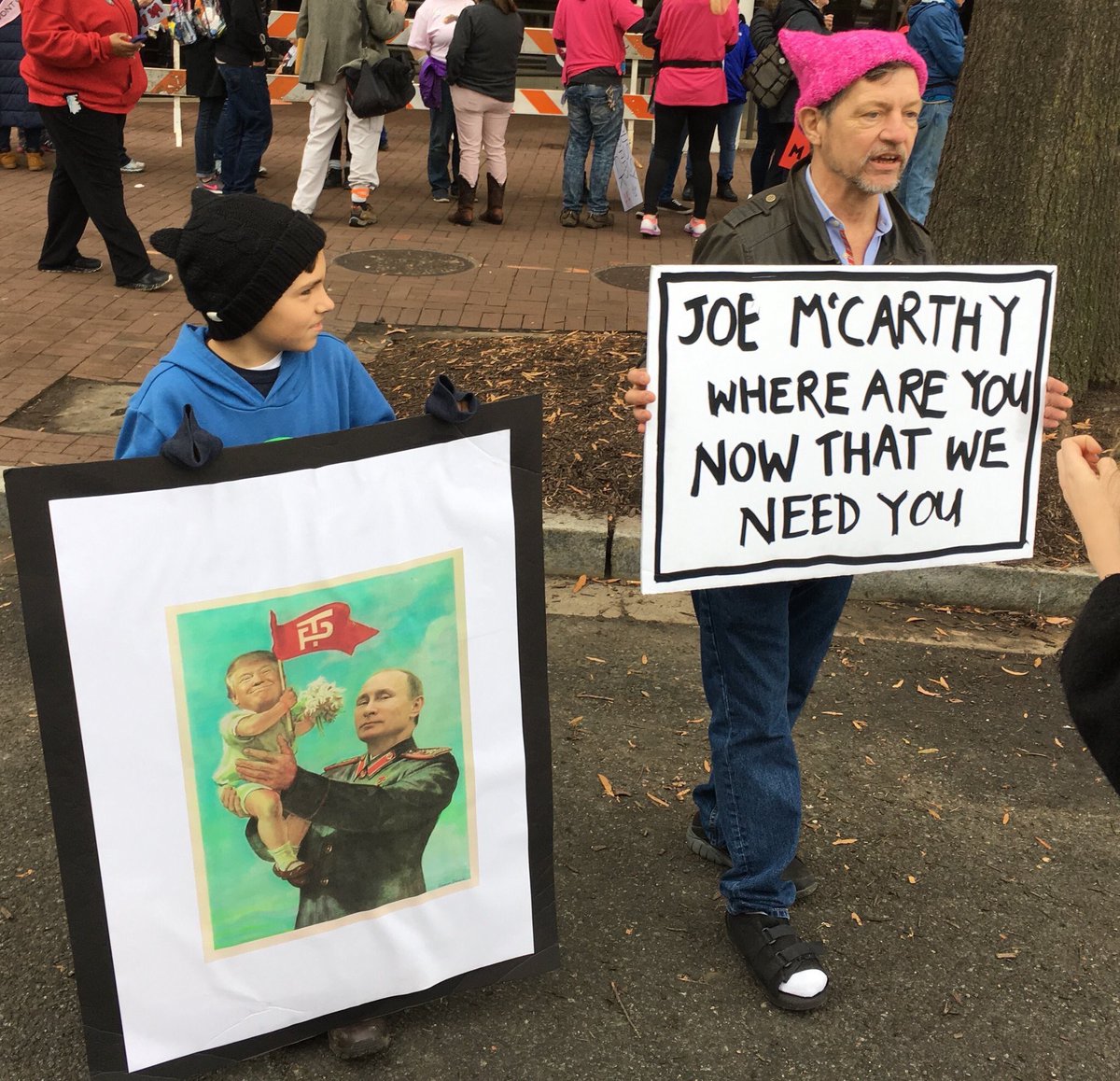 For liberals to call for the return of Joe McCarthy is disgusting. This redbaiting and red scare has real, practical implications and harm. What’s telling about this new Red Scare is the connections between it and the anti-Black stench of “outside agitators”. It is an ethos that argues that Black people and other oppressed populations are and have been satisfied with a status quo that alienates, suppresses, and oppresses them. Further, the underlying assumption is that Black people could never think of organizing and taking action against their oppressors and would not think of defending themselves were it not for an alien and sinister force stirring up trouble.

Product of outside interference? Russiabot?

Of course these accusations of outside agitation sound familiar to anyone with even a cursory knowledge of the Civil Rights Movement. I would assume most liberals are familiar with the charges laid against the likes of not just King, SNCC, and the SCLC, but the local, often unheralded leaders, marchers, singers, corps. Which suggests that liberals are aware of what they’re doing, but just don’t care. Why else would they accuse Black and other oppressed and poor people of being idiotic and essentially satisfied with their positions, besides being shot down on the sidewalks while running away from cops, being denied basic protections while working, being run over by cars while marching in the streets? They would rather capitulate to regressive, anti-black standards and appease reactionaries in order to align against a supposed enemy[2] that they believe assisted a common enemy—a behemoth of horror, surely, but one who is primarily aided and abetted by these same standards of racism and status quo protection that the accused “Russian agents” are protesting against.

As long as liberals continue to individualize their resistance—fighting against personalities rather than against a pathological ideology which causes material harm—they will continue to cause rather than alleviate suffering. It’s almost like they do not seek liberation, but only softer chains.

Note: This post originally appeared in the Patreon page, where you can find exclusive material and preview others. Please consider subscribing.

[1] Disclaimer for what it’s worth: I have begun listening to Eugene Puryear’s By Any Means Necessary show via podcast. It’s good stuff, imo.

[2] Can we sometime talk about how Russia is a supposed enemy while Saudi Arabia actually had a part in attacking us? Russia wasn’t an official enemy at the time, nor is it now, strictly speaking. For that matter, how are Iran or Cuba enemies as they do not pose a threat to us and, if we’re counting human rights violations, that’s just fucking laughable coming from the United States.