My Dominican friend remembers Santa being black and bearing gifts. A Twitter friend, Kristen Soo aka @readtooswift, shared that her Asian uncle dressed up as Santa a couple of years ago. I know this flies in the face of convention, of Northern European Christmas myths, and Megyn Kelly, but if my dad could be (though wasn’t) Santa Claus, then why not my friends’ dads – or moms? Or are Santas only for and from white people?

Around Easter of last year, I posted some satirical pictures of Jesus mocking conservatives and American Empire to my Leftcheek and Commie Pinkos Wrote My Bible Facebook pages and someone asked me why Jesus had to be white. I of course answered that he doesn’t, but these were the images that I found. But I knew what this person meant and became more deliberate about finding other representations of Jesus.

My grandmother, a Puerto Rican with mocha-ish skin and tight curls, came to be a devout Evangelical around the age of forty. She kept pictures and representations of Jesus all around her apartment upstairs from me. Looking back, all these paintings and figurines were white, often blonde, often smiling or plaintive or pleading. They never looked like her but like other people from church’s tradition (our particular church was mixed-race, but the leaders were usually white men). Come to think of it, they rarely looked like me – with freckles and an unkempt ‘fro. This was the acceptable Jesus in Anglo churches.

Of course the historical Saint Nicholas and Jesus were not white – certainly not white by conventional Whiteness standards (which tends to favor fair-skinned people from Northern Europe). Nicholas was darker from Turkey with a black father and Jesus, well, from Nazareth (and what good can come out of Nazareth?). Neither would be mistaken for Brad Pitt. Yet, Renaissance-era paintings and millions of commercials and commercialized books and movies later, both are well-recognized within Western culture as being White. That shouldn’t be a problem – myths are adaptable and should change to each culture and tradition.

So when Fox News and the rest of the Right Wing Media Circus gets so defensive that Jesus is White, Santa is White (and kids, don’t you forget it!) and Christmas is the supreme holiday and should be the one and only recognized for this season (There can only be one!), the problem isn’t that what they are saying is intrinsically bad. White people can recognize Santa and Jesus in their own image and Christians can be the most wonderful time of the year for many. The problem is in recognizing those as the primary or only options. When they declare a War on Christmas or the two biggest representations of Christmas (notice that Mary is not included in this picture), they are really promoting the supremacy of a White Christmas for Whiteness.

To solely focus on Christmas dismisses those who have deep depression for various reasons around this time, who remember loss, or face a lack of necessary sunshine, or who struggle with family grievances. But also, what of Hanukkah, Ramadan, Winter Solstice, New Year’s, and/or Kwanzaa in addition to or separate from Christmas? It’s not the only holiday. Nor do any of the holidays need to be celebrated by every one. 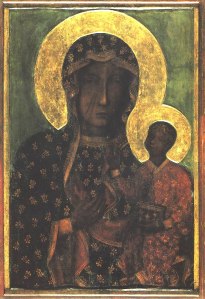 Additionally, picturing Jesus as necessarily a white man (or even necessarily a man) is a disservice to the Jesus of the Gospels – where Jesus was an oppressed minority. In the twenty-fifth chapter of the book of Matthew, Jesus says that his followers will serve him directly and take care of him directly when they serve, visit, and care for the hungry, the prisoners, the sick, the homeless.

Who is oppressed today – who does Jesus look like? An unmarried pregnant teen from the rural regions of Palestine? A shanty-town dweller in Cape Town or Rio de Janeiro? A sixteen year old black man in Cook County Jail? An untouchable in India? A single mother with cerebral palsy? A father awaiting deportation back to Juarez? A trans*woman or man pretty much anywhere? Can Jesus be trans*? Can Santa?

I argue for a tapestry of Jesus, Santa, and Christmas that is multi-colored, multi-ethnic, multi-generational, mult-class, multi-ability, intersectional, open and affirming of all sexualities, identities, capabilities and spectrums. Because Jesus, Santa, and the holidays are for the people – and White Christians are such a small – yet unduly influential – percentage of us all.